After our summer break, we’re back in September with the following two items:

Please note, we will be starting earlier than usual at 6.45pm

Here are the full details:

Waterfall is dead, at least according to some. But in a software development world that is moving more and more to using Agile methods, where do traditional user experience practitioners fit in? I will be attempting to answer that question both from my own experience working within Scrum and Kanban, as well as looking at emerging best practice from leaders in the field of Agile UX.

Pete Bagnall will be leading NUX’s second design exercise in September. The focus will be on high level design, rather than detailed design this time – looking at what information users might require, what the process through their task is like and therefore what functionality will help them achieve their goals. We’ll also look at how this competes with the business goals, and approaches for preventing conflicts between business and user goals, and between the goals of different user communities.

Clients often want guidance on which features they should include in their systems, and how to prioritise them. This exercise will help to show one method of answering those questions in a more rigourous and objective fashion, giving clients reassurance that it is based on more than the designers opinion. Being aware of what information is required to support a feature also helps to uncover dependencies between feature sets, which can help in planning development schedules.

Turning user goals into informational and functional requirements is a vital part of goal directed interaction design. Without this even the greatest interface design is likely to fail.

There will be an opportunity to discuss any techniques you use, so do feel free to bring you methods along! 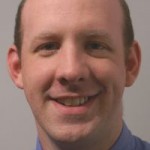 Pete Bagnall is an independent Interaction and Software Architect, at his company SurfaceEffect Ltd. He has had a varied career in the software industry from network research at BT’s research labs at Martlesham Heath (now Adastral Park) to working as an Interaction Designer in Silicon Valley. He’s taught courses for Lancaster University and presented workshops in design methodologies at the BCS annual HCI conference. More details can be found on his website www.surfaceeffect.com

It helps if we have an idea of numbers, so if you want, you can let us know you’re coming at the Upcoming website. It is fine to just turn up on the night if you want.

If you want to tweet about the event or Northern User Experience, our twitter hashtag is #nuxuk

Use the form on the right to add yourself to the mailing list and find out about events in the future.

The entrance is on Peak Street, look for the robot above the door.

The venue has been kindly provided by Code Computerlove, a digital communications agency based in Manchester, England.

Find out more about future events