The next NUX Manchester event is taking place on Monday 4th April in our regular home at the office of Rentalcars.com, at 35 Fountain Street, just behind Primark in Manchester City Centre.

Tickets will be available from 8am on Thursday 24th March.

Devices All The Way Up: Notes on Responsive Design

Designing sites that adapt, in some form, to a users device is not a new thing – Wikipedia lists Audi.com‘s 2001 redesign as the first major instance of such a site.

By contrast, the processes, work flows and tools to cope with the demands of designing for an infinite number of devices are things that we’re collectively only just making a start on.

From stakeholder management to prototyping in HTML to designing for performance (and a few things in between), this talk, an adaptation of a one day workshop, shares real world experiences – both good and bad – gained from working on several large responsive projects. 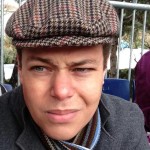 Loz is the former Director of Product Design and UX for Safari Books Online, an O’Reilly Media owned Netflix style subscription service for books, where he built a small team of cross functional designers working on web and native apps.

With over 20 years experience, occupying various roles, Loz has been involved in a number of high profile responsive web projects including work for The Guardian and Art Fund. In previous lives he’s also worked for BBC News & Sport, Sapient, LBi, Network Rail and a smattering of other global brands.

A proud Yorkshireman and professional miserabilist, when not working Loz can be found moaning about the cost of a pint in London (£5.90????), moaning at others whilst playing football, or moaning at perceived refereeing injustices whilst being a glory hunting supporter of Liverpool.

Tickets will be available from 8am on Thursday 24th March.

How to find us